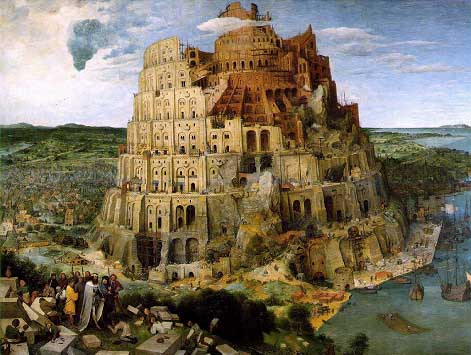 The Tower of Babel

It is exceptionally difficult getting everyone on the same page to execute a strategy or high-level targeted outcome. It’s especially hard to do when the participants don’t even seem to speak the same language. 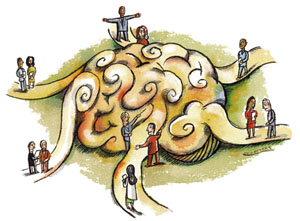 I’m Canadian and speak English as a first language. The first time I went to Scotland, I could hardly understand a thing they said, even though we both spoke English. My father’s side of the family originally comes from Scotland, so I somehow thought that it wouldn’t be that difficult. It was.

While I was living in Amsterdam we had a receptionist, Rhona, from Glasgow Scotland. Clients from countries all over the world would call and she was the first person they would speak to. She had the most beautiful voice you’ve ever heard

[What I wouldn’t do to figure out how to find Rhona and put a clip of her voice in here for you]. Anyone who didn’t speak English as a first language had a hard time understanding her. We thought of giving her a different job, but never did. Whenever she was away, clients said they hoped she would return soon. They looked forward to her laughter and the lilt of her voice as she tried to figure out who they were and wanted to speak to.

Few of us have such beautiful voices that other people, whose first language is not the same as our own, will take the time to try to understand us. The same is true in organizations.

Businesses slot people into units that have areas of market focus or skills like finance, sales, engineering etc. It is the same for Universities, Governments and other organizations. Each organizational unit speaks its own language. Their language includes their acronyms, processes and even the personal incentives that shape their behaviors.

Each organizational unit emphasizes their differences to demonstrate their area of expertise. We often use the term ‘silos’ when we talk about groups within the same organizational. They are the vertical hierarchies that have a high level of separation and uniqueness of skill and language. These differences make communications between silos very difficult.

How did this all come about? There actually is an origin with the problem and it goes back before Henry Ford started the automated factory. In fact, according to the Bible it goes back to the Story of the Tower of Babel. It seems it was all the fault of the Babylonians. 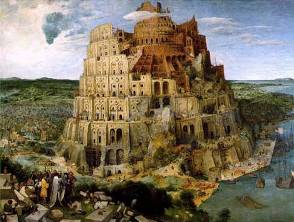 At the time we were all descended from Noah and spoke the same language. The people of Babylon started constructing a building that would reach all the way up to heaven. Talk about being upset. God was so put out that he came up with a really inspired punishment for mankind. He made everyone start speaking different languages. You can imagine that it became impossible for anyone to work together. They could no longer finish building the tower. This is the origin of the word ‘babbling’. Now you know why you can never understand engineers. There are wonderful paintings of artists’ ideas about of all the crazy building problems that occurred.

To this day we are still trying to construct towers of Babel for our organization. It appears that we’re still suffering for the Babylonian’s mistake. Attempts by countless managers over the past hundred years haven’t helped much us get on the same page, to understand each other. Many organizations seem to have given up entirely trying to get their people on the same page.

A level of commitment is required for those organizations that truly want to get everyone on the same page. If there is commitment, then there are a few ideas that do seem to significantly improve the ability for different groups to work together on execution. Most surveys would put place getting everyone on the same page at the top of the list for enabling successful execution. Let’s start there.

You have to start being more precise in your language about what common execution words actually mean. It isn’t that difficult if you start with this small set of words and phrases. Just try be very consistent in their use. Here are the most important three words to use with a consistent meaning:

Three Quick Ideas for How to Get People on the Same Page with these Words:

Draft a picture that on the right side of the page shows the highest-level common outcome. Working from right to left, draw the interim outcomes necessary to achieve the outcome above it. Use a sufficient level of detail to make who you’re talking to comfortable that the outcomes they are interested are also included.

Creating it together increases shared ownership of the outcome roadmap. The outcome descriptions should be in language that everyone understands. Use it again and again as the basis of ongoing conversation as things change.

No one has enough resources to plan and execute every initiative that is likely to be identified. Use the roadmap to gain agreement on the relative importance of the outcomes. For example, there may be three interim outcomes necessary to achieve the next highest outcome. Decide together what the relative importance is of each of the interim outcomes. Which are relatively more important to achieving the next highest-level outcome? This way you don’t have three outcomes all high priority. Each one is relatively more or less important than the others.

Just using these three ideas will move you much further toward getting everyone on the same page. This is a great step forward in achieving increased success in execution.