This the second installment sharing a personal work experience having worked in over 45 countries. One picture that keeps coming back to me is about execution in the Cote d’Ivoire. (Don’t worry, no one dies).

I was a project manager for Raytheon in the early 1980’s. The airport manager for Air Afrique in the Ivory Coast was one of my clients. I spent about 3 months installing an airport departure control system for their main airport. French is the local language, which I spoke well, but with a limited vocabulary. But, one day my language skills completely failed me. My client also owned a restaurant and part of the deal was that I would eat all evening meals there. This particular evening there were a large number of French colleagues, their wives and my host. We were having a wonderful time, and with a few glasses of wine, my French was almost fluent. I was excited to tell them that I’d made the most fantastic discovery that day. There was Curling in Abidjan. 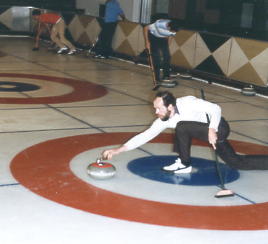 The Intercontinental Hotel had connected to it, a skating rink. I was told that, at that time, it was the only skating rink in all of Africa. Not only that, but it also had markings under the ice for Curling! Every second Tuesday a group of expats gathered and played curling. Beyond that, I was at a loss how to explain the game in French. There was no other option. With great excitement I invited my dinner table to come to the next curling bonspiel two weeks hence.

Here is what the Duluth Curling Club says about curling: “The strategy of positioning rocks as the end develops is extremely subtle, and is what makes curling a lifelong obsession for some people. It has been called “chess on ice”. … Above all else, curling is game of skillful execution of strategy.” That’s right Curling is a game of skillful execution of strategy. I hadn’t known that my years of curling in my teens would be a foreshadowing of my life work!

I had a trip back to Amsterdam, where I was living, and secured the right footgear for my grand entry into the world of African curling. I arrived at the rink duly attired and was made Skip of my team of four, which meant I was the last to throw a rock. (see the photo). I’m sure that I had an audience of fifty locals and expats. Many of them were ready with cameras to capture my first rock thrown in Africa. I have to say that I was excited and confident of my skills. Six other players each threw two rocks before it was my turn. As skip, I had demonstrated my strategic abilities and had created a difficult situation for my competing skip. It was now my turn to execute. I made my way with great speed, and elegance down the ice, pushing with one foot and sliding with the other.
As I prepared to squat down into the “hack” to take my shot, I took one last look at my audience before squatting down to execute, to throw my stone, and achieve our team’s strategy.

The next thing I heard was roaring laughter. As I had squatted down to take my first shot, my pants split with a great ripping sound. If you look at the photo, you can actually see a small sliver of white in a strategic location. That is where a cool breeze confirmed what had just happened. There was nothing to do about it, except continue playing amid the flashing of the cameras my friends had all brought. You might have even seen the reflection of my red face in the ice that day.

Curling; it’s all about strategy and execution. Sometimes execution takes some unusual turns. As far as I know they’re still playing curling in Abidjan.